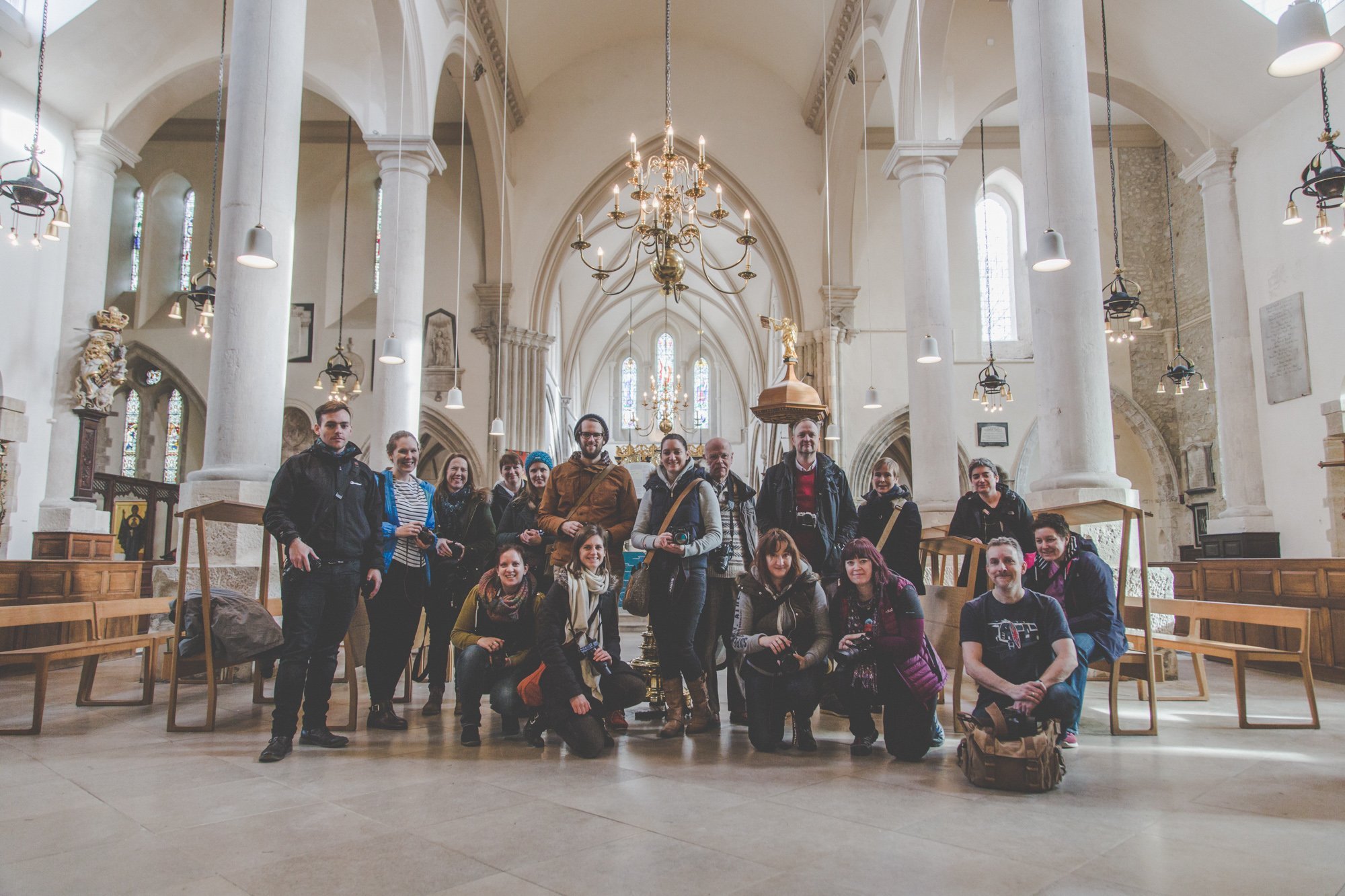 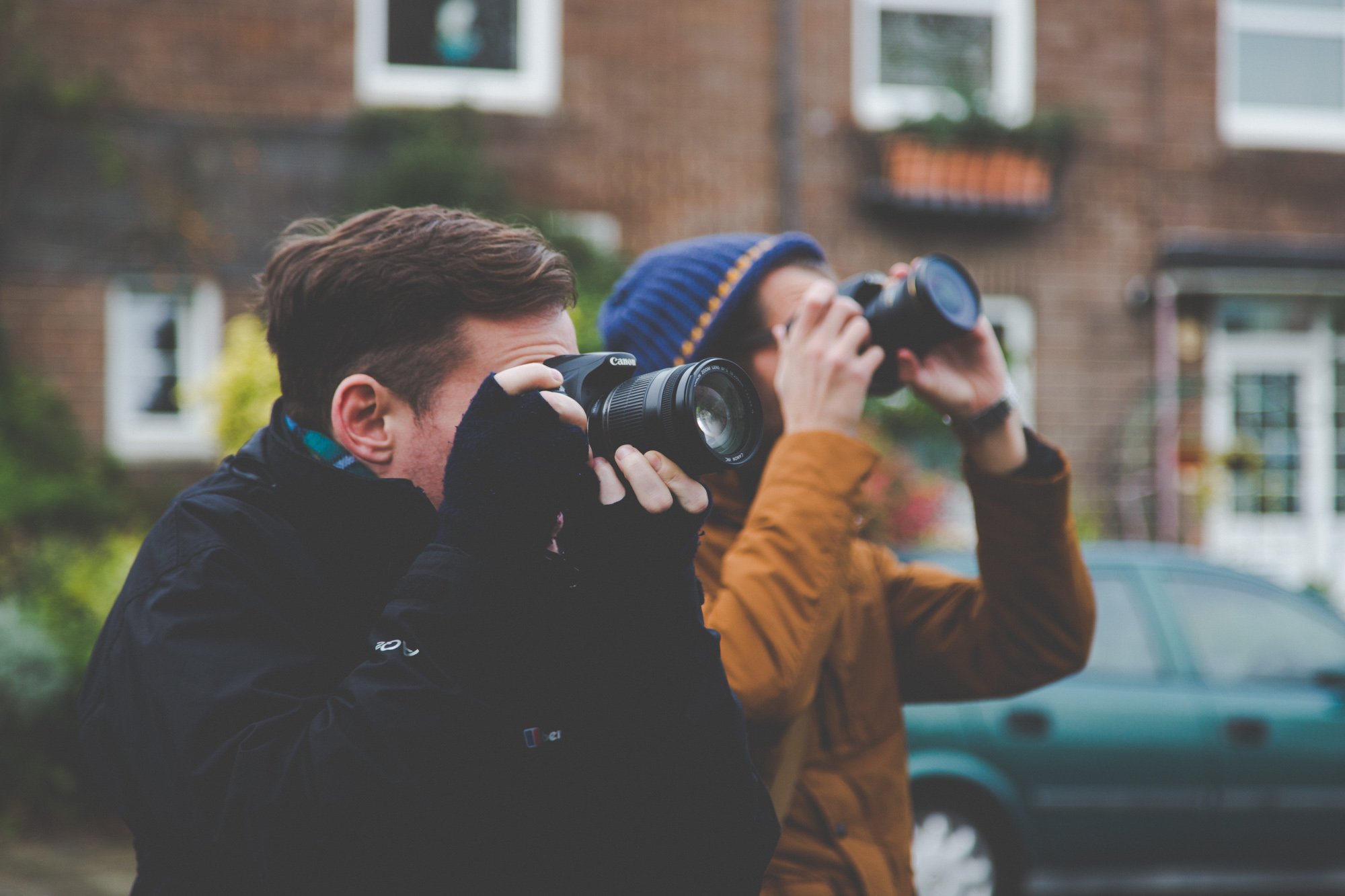 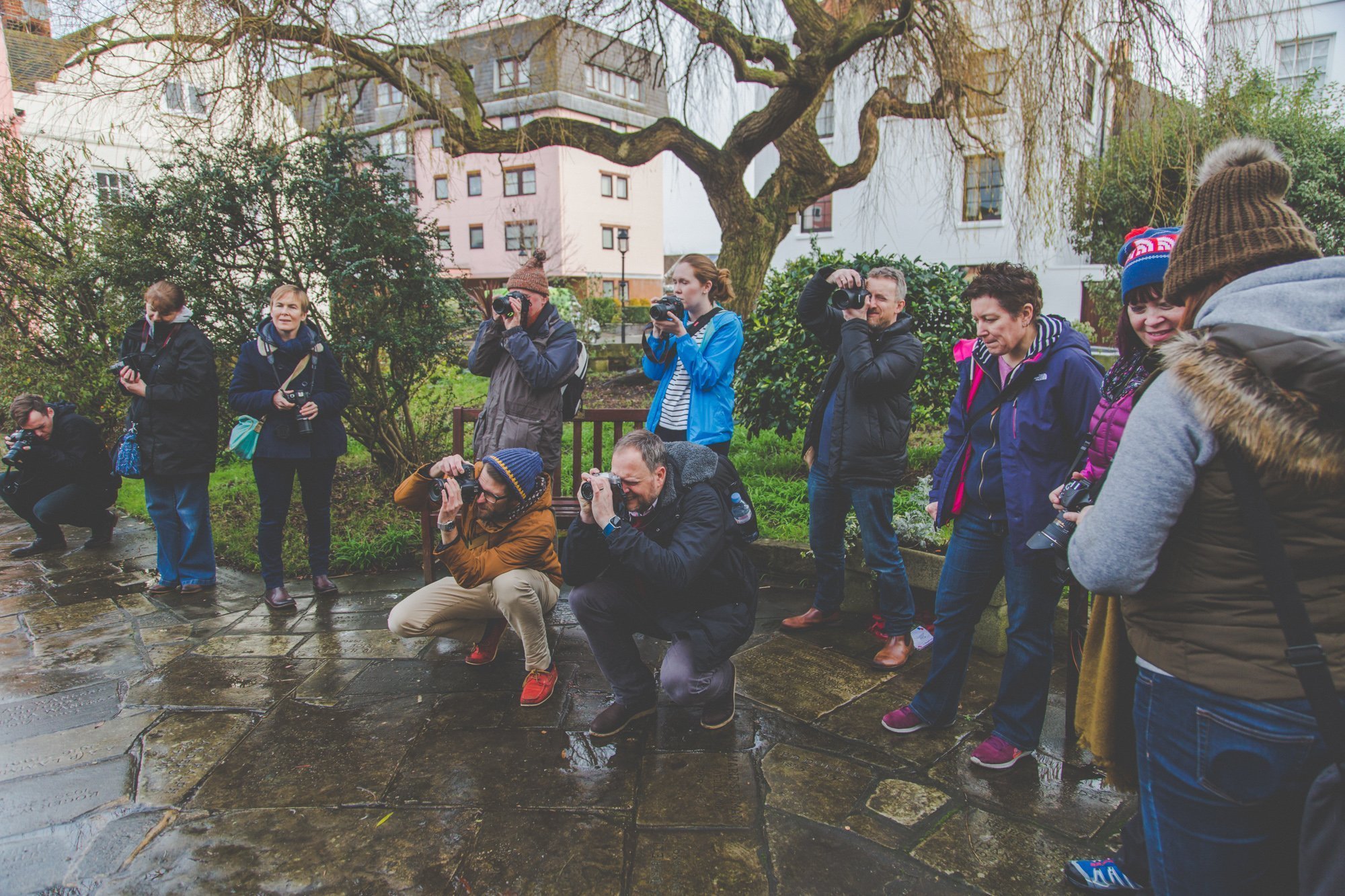 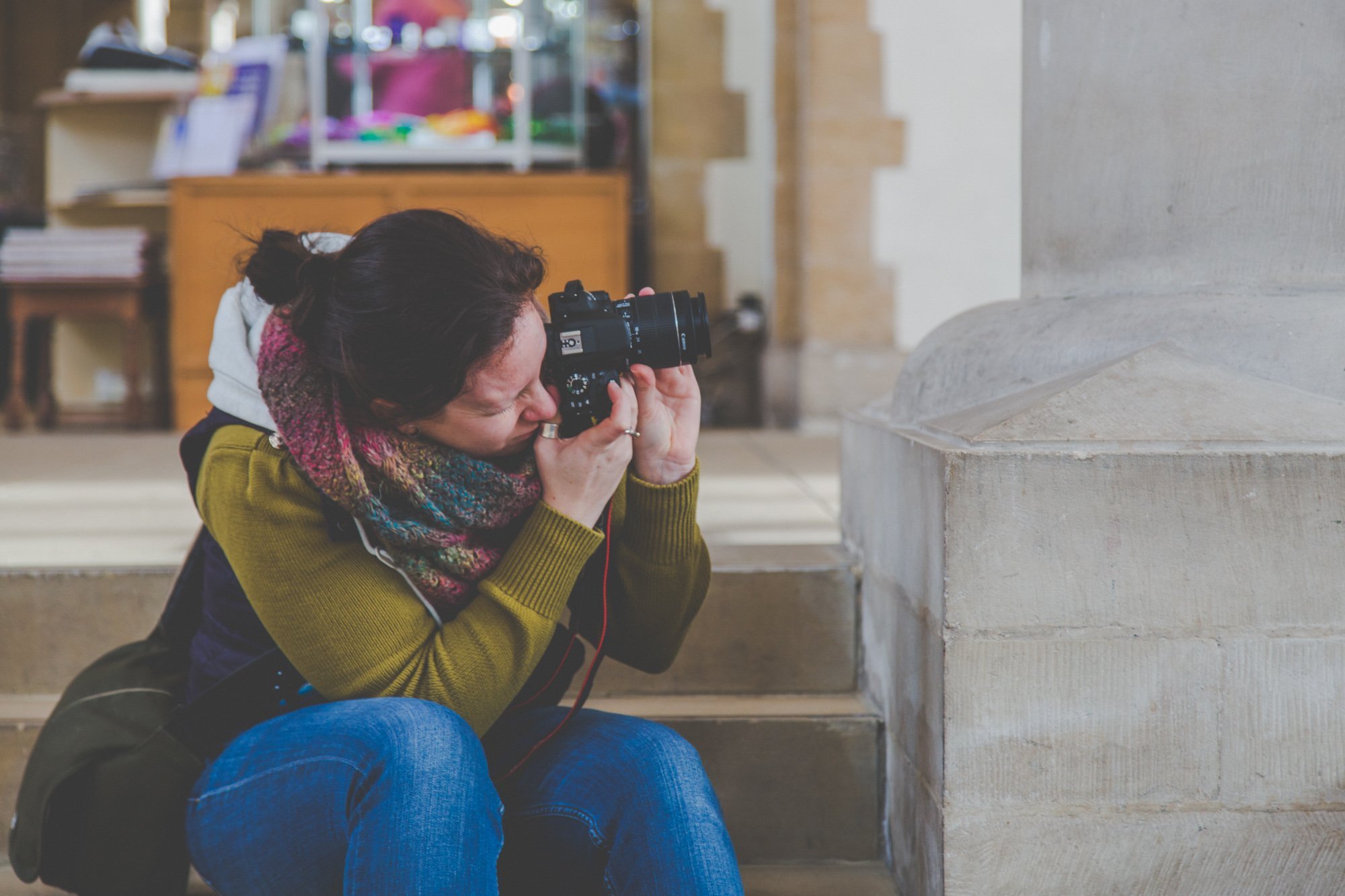 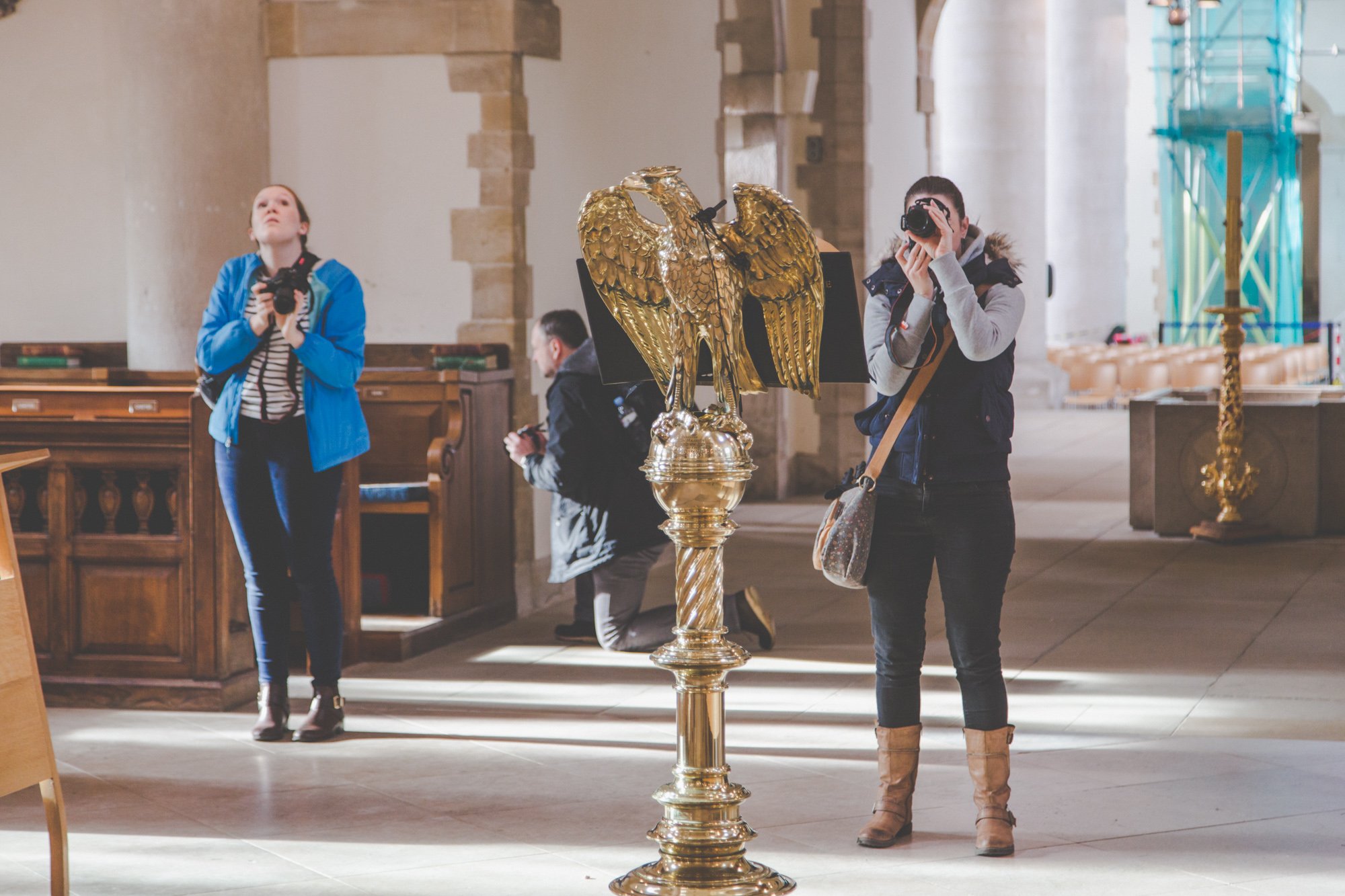 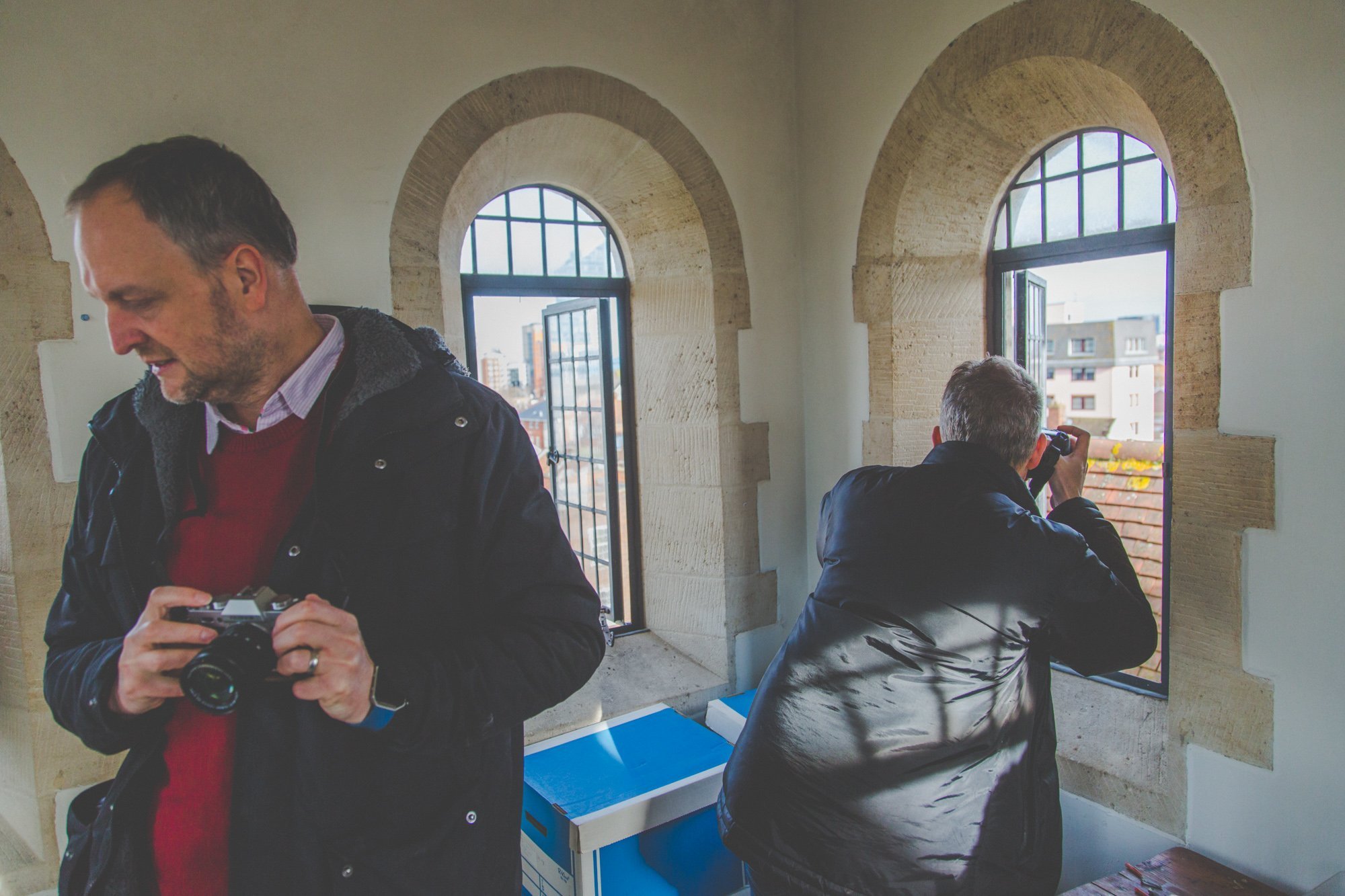 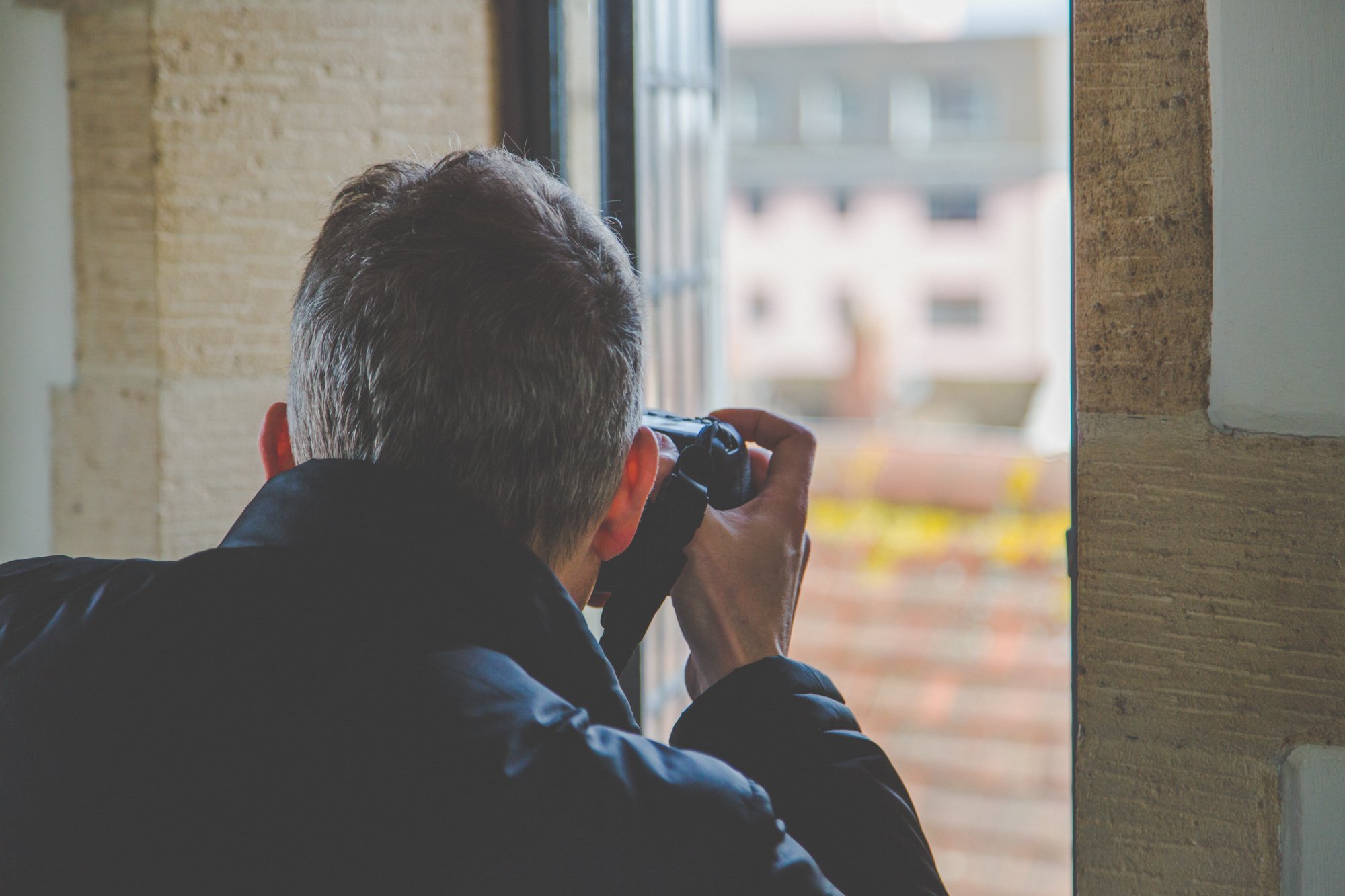 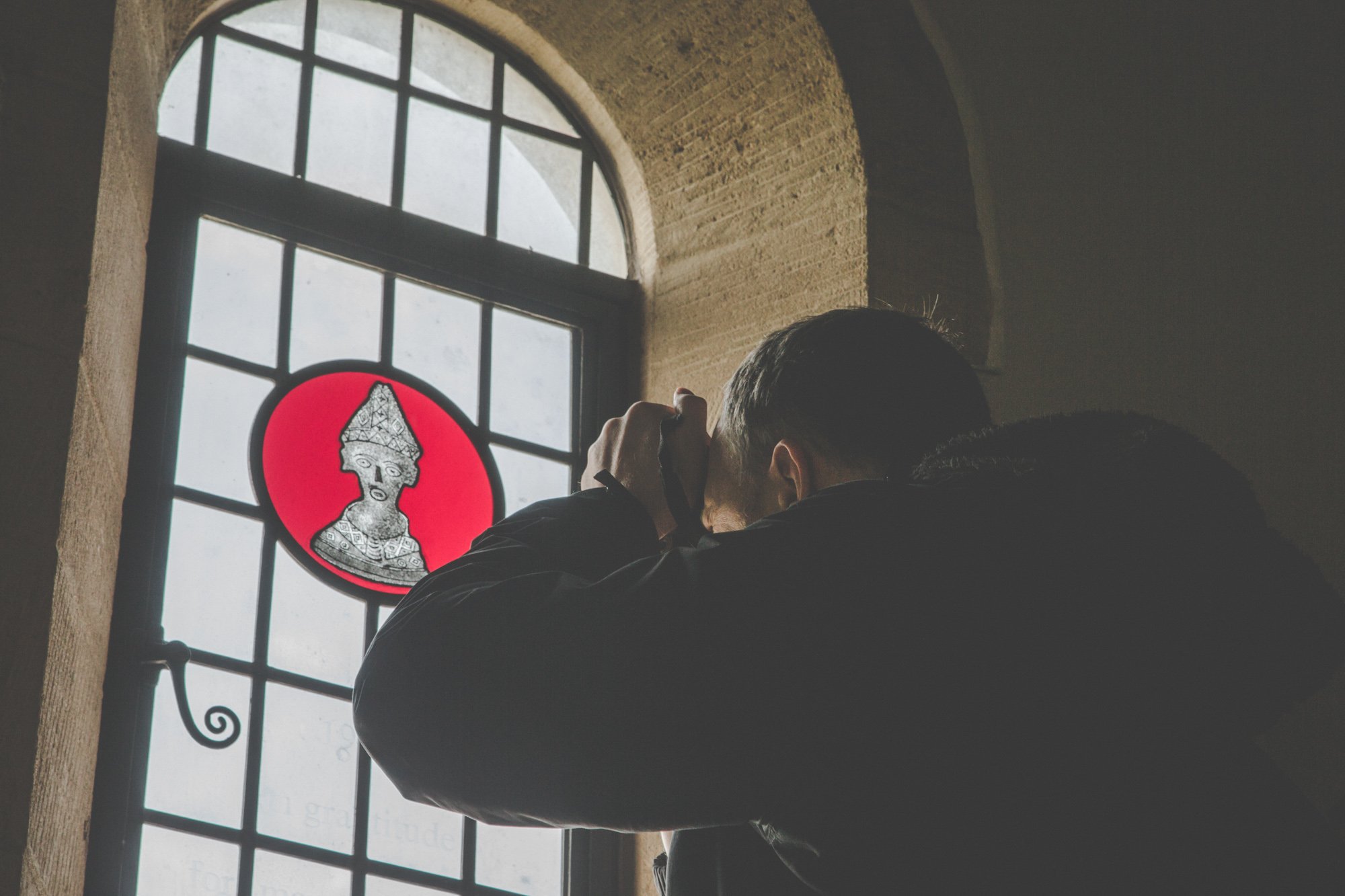 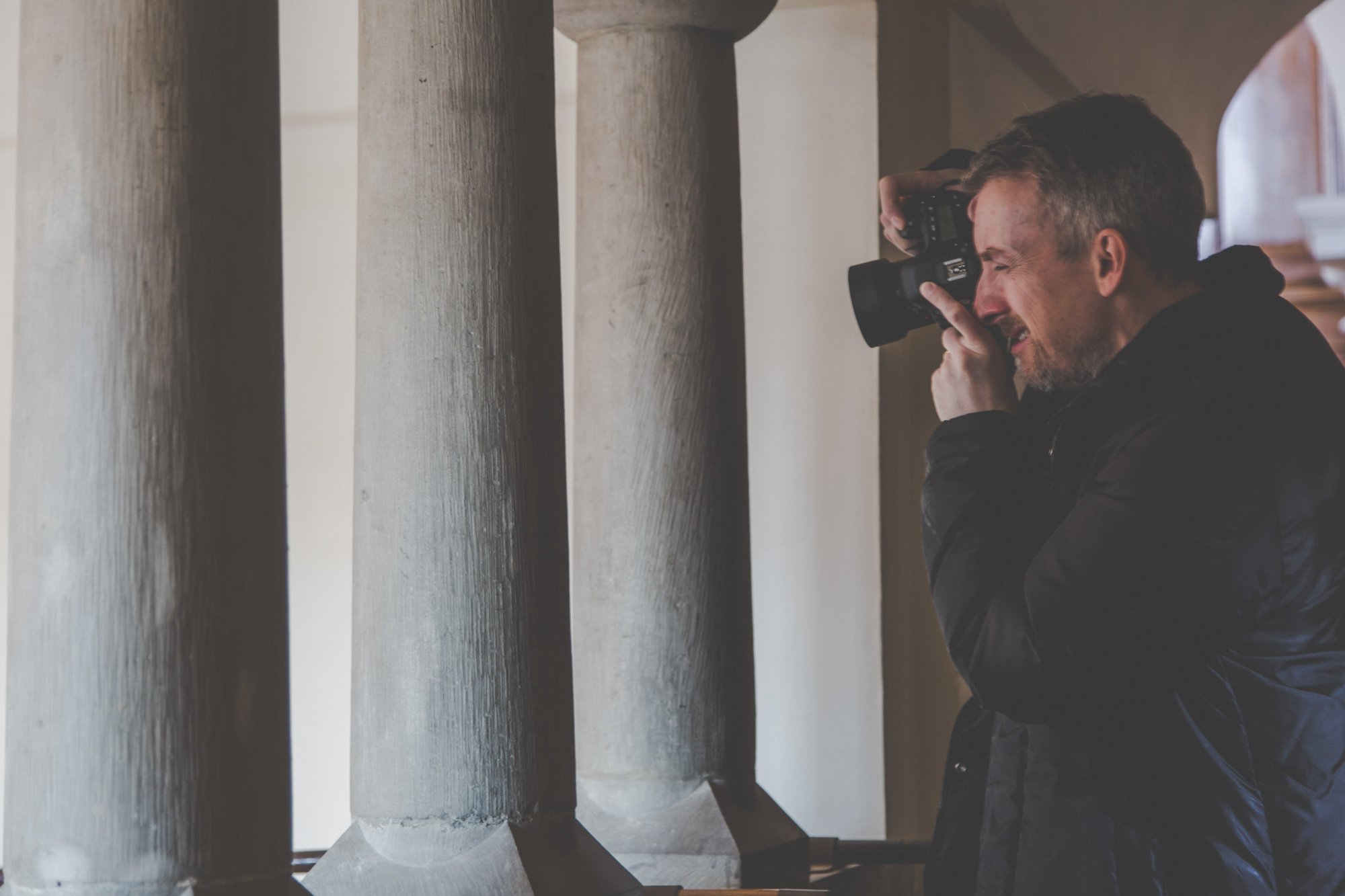 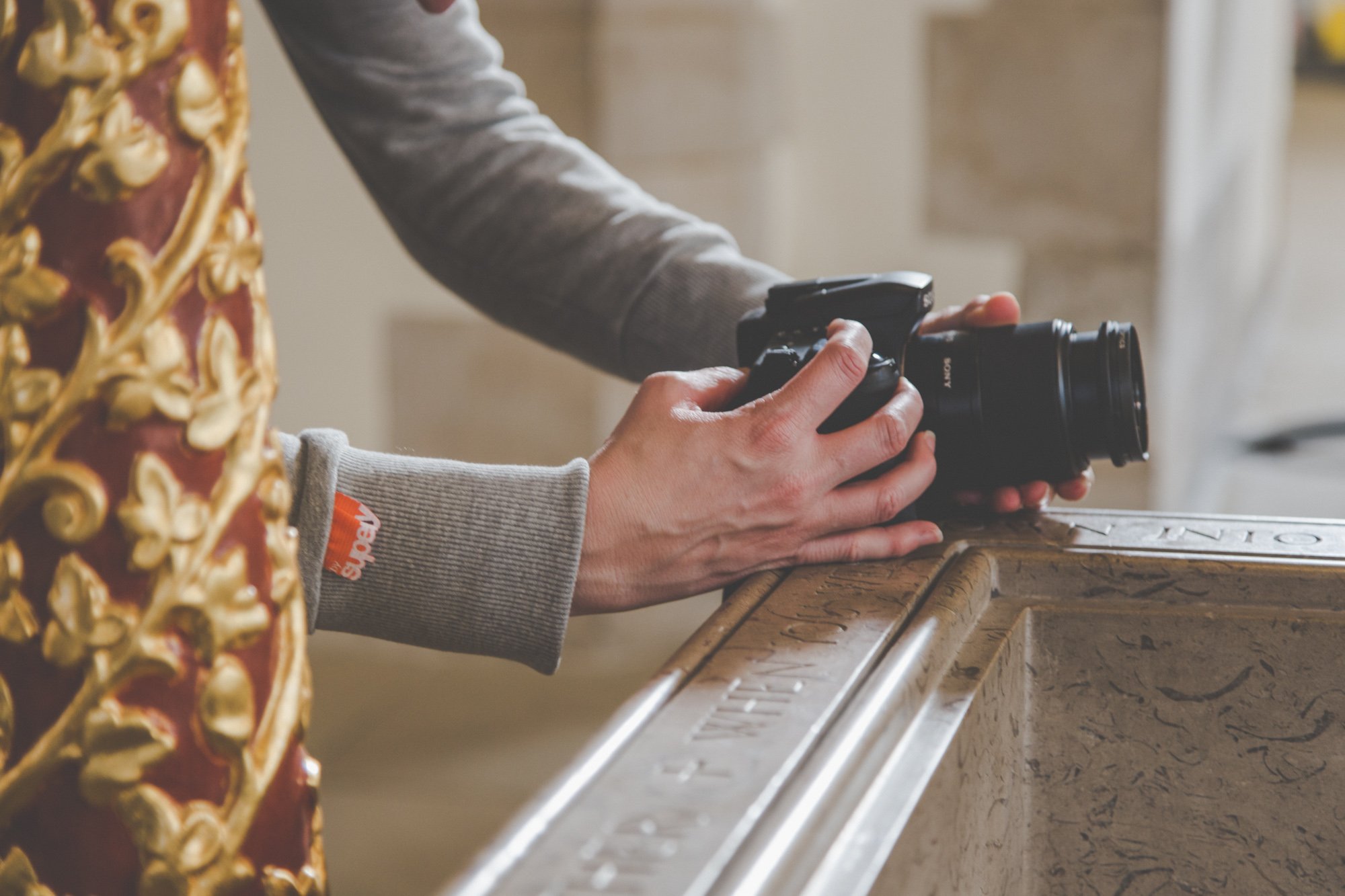 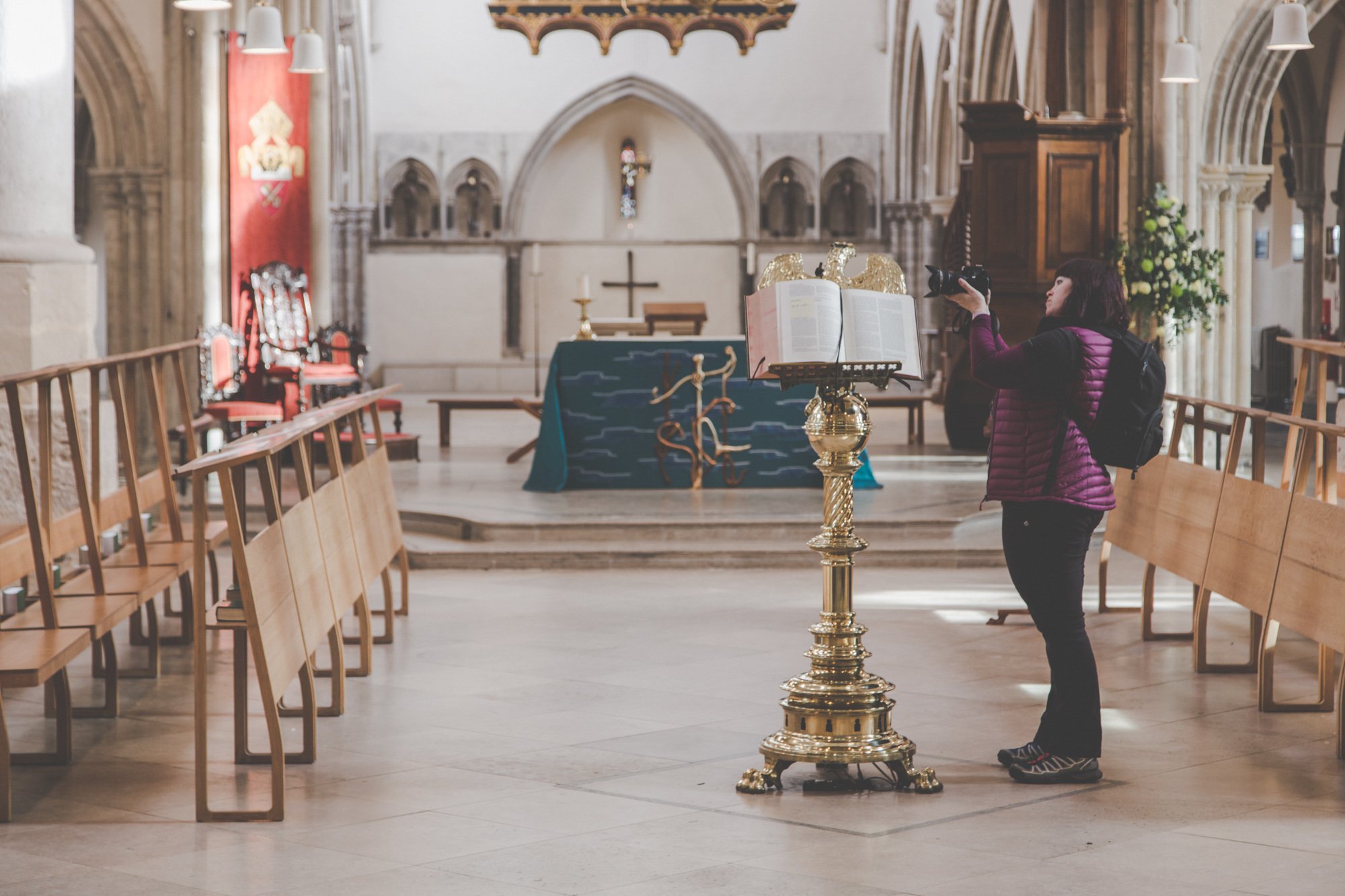 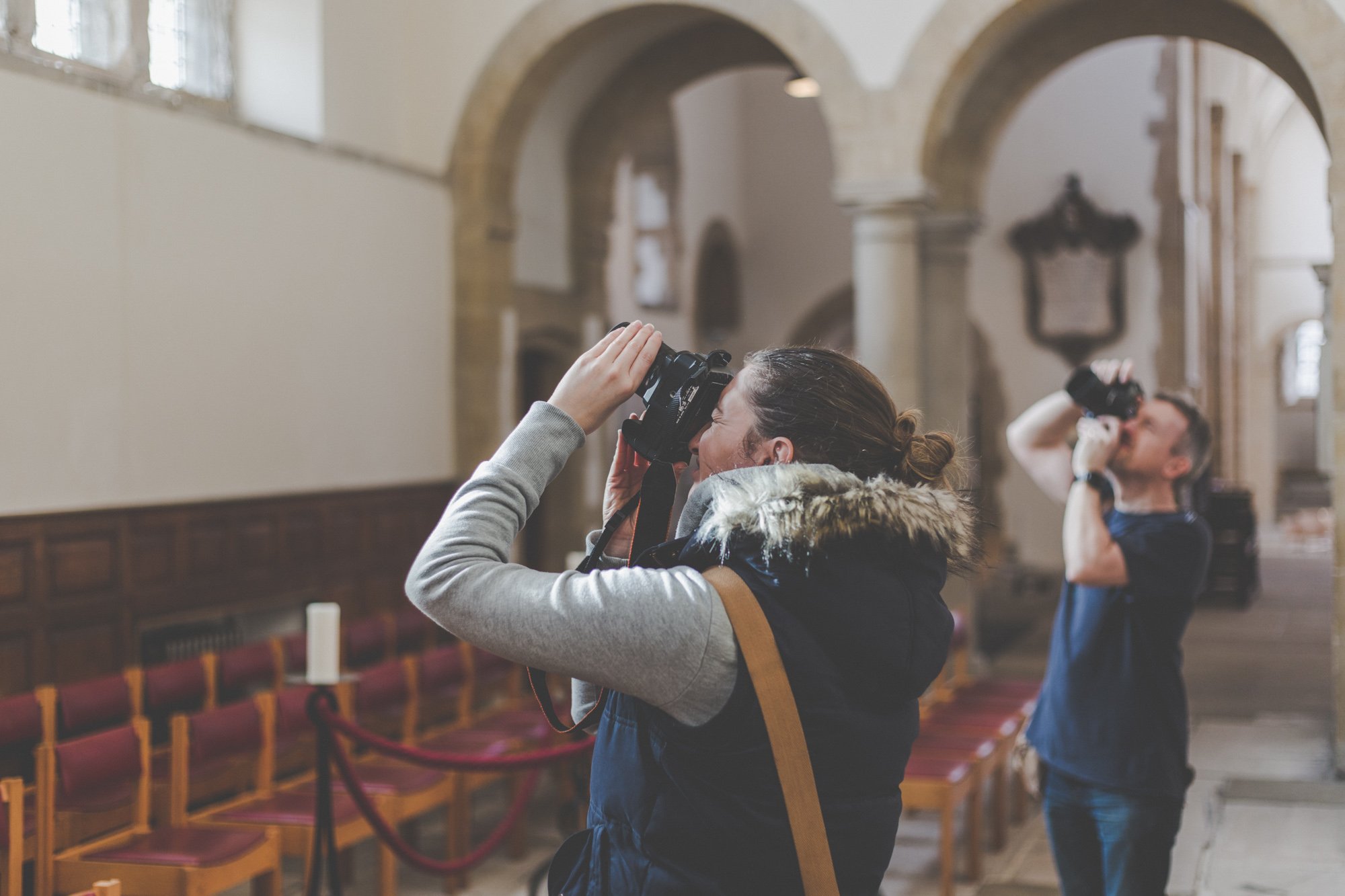 More than a little behind on these walkshop write-ups, apologies on that, Strong Island has been a really busy place for the last few months for all sorts of reasons, but looking forward to sharing photos from the many workshops we’ve had since the start of the year. Back in mid February we were lucky enough to partner up for the first of a series of photography walkshops with Portsmouth Cathedral located in Old Portsmouth. The Cathedral has had a fascinating history and as well as exploring the grounds and in the main spaces within the church we were also privileged to be shown some areas normally not accessible to the general public.

We first met up outside the main church entrance and began with an explore around the cathedral, looking at the building’s architectural features and the old grounds. We begin with the fairly new West end and the two towers and ornate entrance door. We looked at geometry as well as creating triptychs combining different views of the same subject. We worked down to the doors getting close up texture shots of the rusty metal. We then continued around to the memorial garden, which is paved with stones and markers with people’s names on. The trees were just beginning to bud and the first spring flowers were starting to show. We then made our way back to the main entrance and entered the Cathedral.

Normally old church buildings can be fairly dark but we had plenty of light as by this point in the morning the sun was out and streaming in to the large glass windows lining the main space and the stained glass in the old section. We initially worked our way around this new wing before moving in to the older space, looking at light and shadow, leading lines and more symmetry. The older part of the church also had many interesting old features and details as well as large views of the vaulted ceiling.

In small groups we were taken up to the Organ Loft, that arches over one side of the old half of the cathedral. From here we had a fantastic elevated view. The organ was undergoing maintenance so we were able to literally climb inside it, photographing the different elements with a rare view of the inner workings. The different key connectors, like piano wires, were lined up reaching back in the dark rear of the organ, then leading upwards.

Another rare view was provided with access to one of the large towers at the west end, which we had photographed earlier from the outside. Up several flights of stairs and then a ladder we arrived at a small room with window views overlooking Old Portsmouth and out to The Solent. This unique perspective made for some great rooftop views of this part of the city, rarely seen previously. You could also see the Cathedral tower up close too, with it’s beautiful, recently restored weathervane. In no time our two hours were up, we could have easily spent a few more hours carefully exploring this space with our cameras…and some of us have since. Portsmouth Cathedral is a very welcoming space and they are happy for visitors to pop by and discover what lies within, including bringing your camera.

This walkshop was one of a series which will culminate in an exhibition of work by participants later this year. If you came along to any of the cathedral walkshops (we had the second one on Saturday night) then please send in your photos from the walkshops for inclusion in the exhibition, get in touch via email: paul@strongisland.co

The 2017 walkshops for Spring & early Summer are now available, find out more about these upcoming walkshops at: 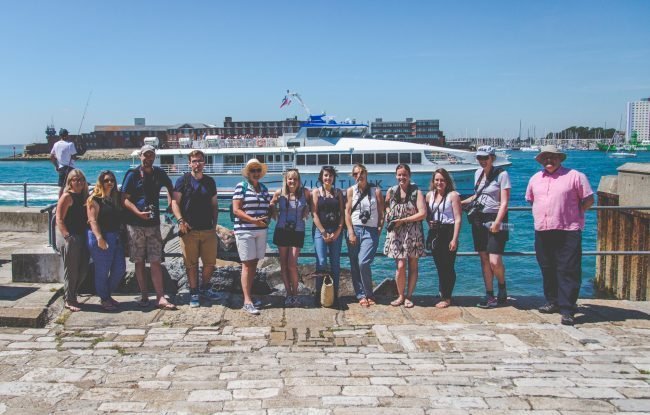 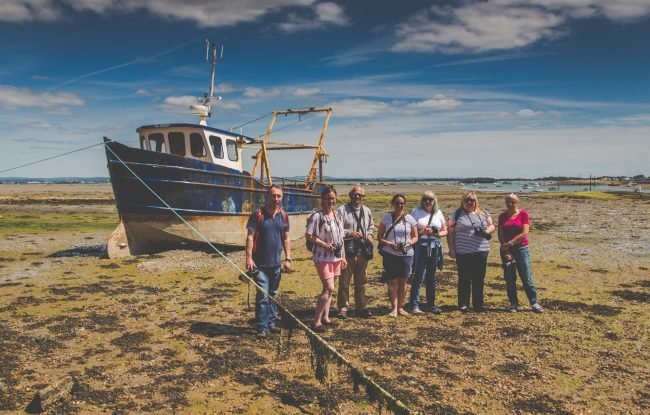 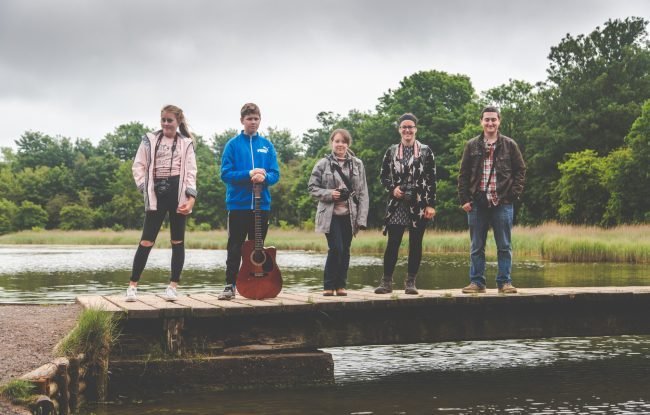 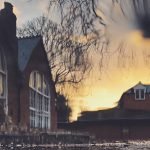 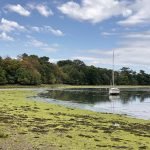